By: Editorial Staff on Jan 8, 2017
188
Share FacebookTwitterWhatsApp
An international team of astronomers, including Lancaster’s David Sobral, has discovered a cosmic one-two punch never seen before.
Two of the most powerful phenomena in the Universe – a supermassive black hole and the collision of giant galaxy clusters – have combined to create a stupendous cosmic particle accelerator.
By combining data from some of the best X-ray, optical and radio telescopes in the world, researchers have found out what happens when matter ejected by a giant black hole is swept up in the merger of two enormous galaxy clusters.

“We have seen each of these spectacular phenomena separately in many places,” said Reinout van Weeren of the Harvard-Smithsonian Center for Astrophysics (CfA), who led the study that appears in the inaugural issue of the journal Nature Astronomy. “This is the first time, however, that we have seen them clearly linked together in the same system.”

This cosmic double whammy is found in a pair of colliding galaxy clusters called Abell 3411 and Abell 3412 located about two billion light years from Earth. 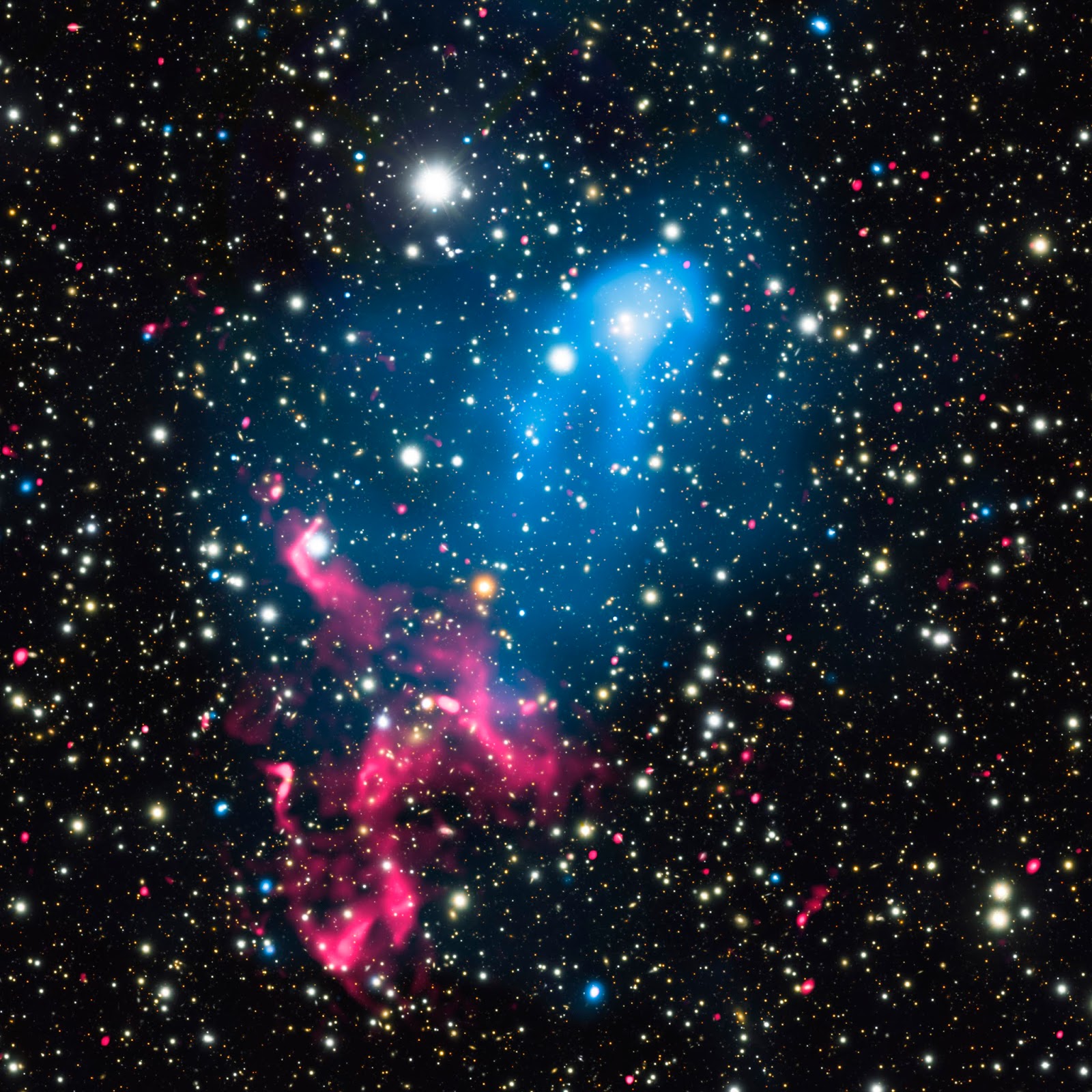 These two clusters are both very massive, each weighing about a quadrillion – or a million billion – times the mass of the Sun.

Optical data from the Isaac Newton Telescope, in La Palma and Keck Observatory and Japan’s Subaru telescope, also on Mauna Kea, Hawaii detected the galaxies in each cluster.

Dr David Sobral from Lancaster University said: “It was exciting to take deep images of this merger of galaxy clusters with the 2.5m Isaac Newton Telescope so we could then point the 10-m Keck telescope to the right galaxies to learn more. It turns out that giant telescopes can also “see further by standing on the shoulders” of smaller telescopes like the Isaac Newton.”

The comet-shaped appearance is produced by hot gas from one cluster ploughing through the hot gas of the other cluster.
First, at least one spinning, supermassive black hole in one of the galaxy clusters produced a rotating magnetic funnel. The powerful electromagnetic fields associated with this structure have accelerated some of the inflowing gas away from the vicinity of the black hole in the form of an energetic, high-speed jet.
[ads-post][right-side]
Then, these accelerated particles in the jet were accelerated to even higher energies when they encountered colossal shock waves – cosmic versions of sonic booms generated by supersonic aircraft – produced by the collision of the massive gas clouds associated with the galaxy clusters.

“It’s almost like launching a rocket into low-Earth orbit and then getting shot out of the Solar System by a second rocket blast,” said co-author Felipe Andrade-Santos, also of the CfA. “These particles are among the most energetic particles observed in the Universe, thanks to the double injection of energy.”

The Moon is Older Than Scientists Thought