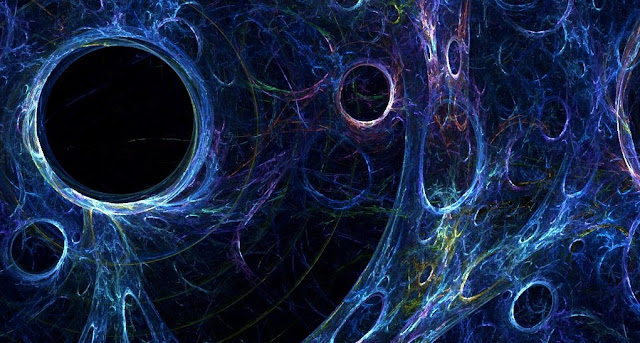 tchaikovsky2, Deviant Art
The physicists, Thibaut Josset and Alejandro Perez at the University of Aix-Marseille, France, and Daniel Sudarsky at the National Autonomous University of Mexico, have published a paper on their proposal in a recent issue Physical Review Letters.
“The main achievement of the work was the unexpected relation between two apparently very distinct issues, namely the accelerated expansion of the universe and microscopic physics,” Josset told Phys.org. “This offers a fresh look at the cosmological constant problem, which is still far from being solved.”
Einstein originally proposed the concept of the cosmological constant in 1917 to modify his theory of general relativity in order to prevent the universe from expanding, since at the time the universe was considered to be static.
Now that modern observations show that the universe is expanding at an accelerating rate, the cosmological constant today can be thought of as the simplest form of dark energy, offering a way to account for current observations.
However, there is a huge discrepancy—up to 120 orders of magnitude—between the large theoretical predicted value of the cosmological constant and the tiny observed value. To explain this disagreement, some research has suggested that the cosmological constant may be an entirely new constant of nature that must be measured more precisely, while another possibility is that the underlying mechanism assumed by theory is incorrect. The new study falls into the second line of thought, suggesting that scientists still do not fully understand the root causes of the cosmological constant.
The basic idea of the new paper is that violations of energy conservation in the early universe could have been so small that they would have negligible effects at local scales and remain inaccessible to modern experiments, yet at the same time these violations could have made significant contributions to the present value of the cosmological constant.
To most people, the idea that conservation of energy is violated goes against everything they learned about the most fundamental laws of physics. But on the cosmological scale, conservation of energy is not as steadfast a law as it is on smaller scales. In this study, the physicists specifically investigated two theories in which violations of energy conservation naturally arise.
[ads-post][right-side]
The first scenario of violations involves modifications to quantum theory that have previously been proposed to investigate phenomena such as the creation and evaporation of black holes, and which also appear in interpretations of quantum mechanics in which the wavefunction undergoes spontaneous collapse. In these cases, energy is created in an amount that is proportional to the mass of the collapsing object.
Violations of energy conservation also arise in some approaches to quantum gravity in which spacetime is considered to be granular due to the fundamental limit of length (the Planck length, which is on the order of 10-35 m). This spacetime discreteness could have led to either an increase or decrease in energy that may have begun contributing to the cosmological constant starting when photons decoupled from electrons in the early universe, during the period known as recombination.
As the researchers explain, their proposal relies on a modification to general relativity called unimodular gravity, first proposed by Einstein in 1919.

“Energy from matter components can be ceded to the gravitational field, and this ‘loss of energy’ will behave as a cosmological constant—it will not be diluted by later expansion of the universe,” Josset said. “Therefore a tiny loss or creation of energy in the remote past may have significant consequences today on large scale.”

“Our proposal is very general and any violation of energy conservation is expected to contribute to an effective cosmological constant,” Josset said. “This could allow to set new constraints on phenomenological models beyond standard quantum mechanics.

“On the other hand, direct evidence that dark energy is sourced by energy non-conservation seems largely out-of-reach, as we have access to the value of lambda [the cosmological constant] today and constraints on its evolution at late time only.”
Journal peovided by American Physical Society
dark energy
115
Share FacebookTwitterWhatsApp

Probe For Nanofibers Has Atom-Scale Sensitivity

Physicists Solved: What Causes The Accelerating Expansion Of Our Universe?

Explaining The Expansion of The Universe Without Dark Energy

Cosmologists Find A Way To Measure The Dark Energy

Graphene’s Superconductive Power Has Finally Been…