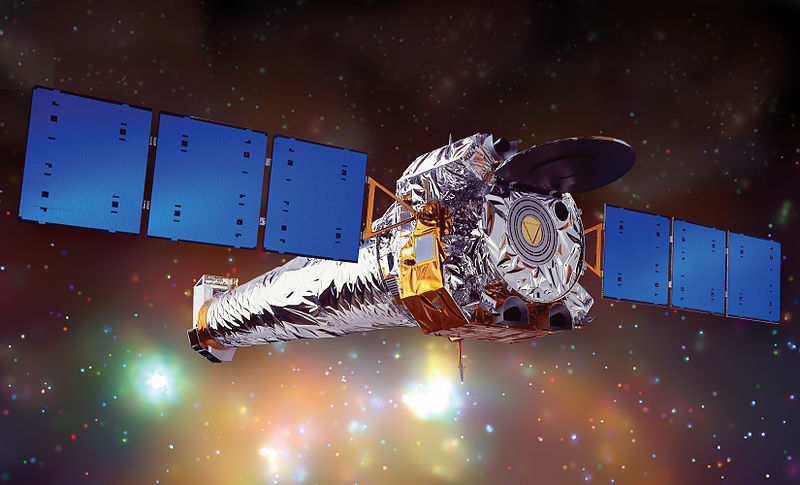 An unparalleled image from NASA’s Chandra X-ray Observatory is giving an international team of astronomers the best look yet at the growth of black holes over billions of years beginning soon after the Big Bang. This is the deepest X-ray image ever obtained, collected with about 7 million seconds, or 11 and a half weeks, of Chandra observing time.
The central region of the image contains the highest concentration of supermassive black holes ever seen, equivalent to about 5,000 objects that would fit into the area of the full Moon and about a billion over the entire sky.

“With this one amazing picture, we can explore the earliest days of black holes in the Universe and see how they change over billions of years,” said Niel Brandt, the Verne M. Willaman Professor of Astronomy and Astrophysics, and professor of physics, Penn State, who led a team of astronomers studying the deep image.

About 70 percent of the objects in the new image are supermassive black holes, which may range in mass from about 100,000 to 10 billion times the mass of the Sun. Gas falling towards these black holes becomes much hotter as it approaches the event horizon, or point of no return, producing bright X-ray emission.

“It can be very difficult to detect black holes in the early Universe because they are so far away and they only produce radiation if they’re actively pulling in matter,” said team member Bin Luo, professor of astronomy and space science, Nanjing University. “But by staring long enough with Chandra, we can find and study large numbers of growing black holes, some of which appear not long after the Big Bang.”

The new ultra-deep X-ray image allows scientists to explore ideas about how supermassive black holes grew about one to two billion years after the Big Bang. Using these data, the researchers showed that these black holes in the early Universe grow mostly in bursts, rather than via the slow accumulation of matter.
The researchers also have found hints that the seeds for supermassive black holes may be “heavy” with masses about 10,000 to 100,000 times that of the Sun, rather than light seeds with about 100 times the Sun’s mass. This addresses an important mystery in astrophysics about how these objects can grow so quickly to reach masses of about a billion times the Sun in the early Universe.[ads-post][right-side]
They also have detected X-rays from massive galaxies at distances up to about 12.5 billion light years from Earth. Most of the X-ray emission from the most distant galaxies likely comes from large collections of stellar-mass black holes within the galaxies. These black holes are formed from the collapse of massive stars and typically weigh a few to a few dozen times the mass of the Sun.

“By detecting X-rays from such distant galaxies, we’re learning more about the formation and evolution of stellar-mass and supermassive black holes in the early Universe,” said team member Fabio Vito, postdoctoral scholar in astronomy and astrophysics, Penn State. “We’re looking back to times when black holes were in crucial phases of growth, similar to hungry infants and adolescents.”

To perform this study, the team combined the Chandra X-ray data with very deep Hubble Space Telescope data over the same patch of sky. They studied X-ray emission from over 2,000 galaxies identified by Hubble that are located between about 12 and 13 billion light years from Earth.
Further work using Chandra and future X-ray observatories will be needed to provide a definite solution to the mystery of how supermassive black holes can quickly reach large masses. A larger sample of distant galaxies will come from observations with the James Webb Space Telescope, extending the study of X-ray emission from black holes out to even greater distances from Earth.
The researchers presented their results today (Jan. 5) at the 229th meeting of the American Astronomical Society meeting in Grapevine, Texas. A paper on black hole growth in the early Universe, led by Fabio Vito, was published in the Aug. 10, 2016, issue of the Monthly Notices of the Royal Astronomical Society. A survey paper led by Bin Luo was recently accepted for publication in The Astrophysical Journal Supplement Series.
NASA’s Marshall Space Flight Center in Huntsville, Alabama, manages the Chandra program for NASA’s Science Mission Directorate in Washington. The Smithsonian Astrophysical Observatory in Cambridge, Massachusetts, controls Chandra’s science and flight operations.
Penn State and MIT, under the leadership of Gordon Garmire, Evan Pugh Professor Emeritus of Astronomy, Penn State, developed the ACIS instrument for NASA.
Header Image: Chandra X-ray Observatory from Wikipedia.
Source: Materials provided by Penn State via ScienceDaily.com
black hole
142
Share FacebookTwitterWhatsApp