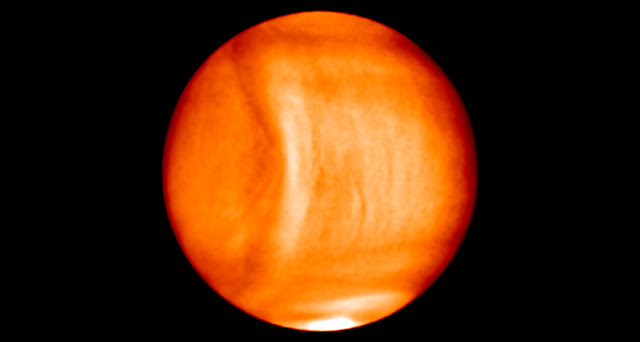 © Planet-C
A bow-shaped structure arches vertically across Venus in this infrared image taken with JAXA’s Akatsuki spacecraft. Whiter colors represent warmer temperatures, showing that the odd structure is hotter than other areas of the atmosphere.
With scorching temperatures and a mind-numbingly slow rotation (one Venus day lasts 243 Earth days), Venus was already a contender for weirdest planet in the solar system. Now add a giant arc-shaped structure to its list of oddities. The mysterious 10,000-kilometer-long structure was so big that it appeared to stretch between the planet’s poles. And it didn’t budge, even as winds in the planet’s upper atmosphere whipped along at a brisk 100 meters per second.
The C-shaped structure, which lasted at least four Earth days, could be a gravity wave, a large disturbance in the flow of a fluid or air, scientists say. It may have formed on Venus when winds in the planet’s lower atmosphere slammed into a mountain range and were pushed into the upper atmosphere, where it got stuck, a team of Japanese researchers report January 16 in Nature Geoscience.
[ads-post][right-side]
Captured in images taken by JAXA’s Akatsuki spacecraft in December 2015, the structure could be the largest stationary gravity wave ever observed in the solar system. If it did shift from the lower to upper atmosphere, there may be more going on near the surface of the planet than scientists previously thought.
Citation: T. Fukuhara. Large stationary gravity wave in the atmosphere of Venus. Nature Geoscience.
jaxavenus
112
Share FacebookTwitterWhatsApp

The Entire Observable Universe In One Image

An Artificial Retina Implant: Could Restore Vision to…

Antarctica: Iceberg A-68 drifts away from Larsen-C Ice Shelf