Keep Yourself Vigilant In March, 2017: Sky Will Make Dissappear A Planet, Then The Persephone Will Return

By: Editorial Staff on Mar 7, 2017
136
Share FacebookTwitterWhatsApp
A few gaps in the gloomy weather over past weeks may have provided opportunity to spot brilliant Venus shining away in the southwest shortly after sunset.
However, this is about to change because on March 25, Venus lines up with the Sun at inferior conjunction. This position occurs when Venus reaches the point in its orbit closest to Earth. Through a telescope the approach to inferior conjunction shows Venus an ever thinning crescent with an increasing apparent diameter.
The apparent size approaches the resolving limit of the human eye, around one arcminute, meaning that theoretically, with good eyesight you might see its shape with the naked eye.
Venus typically passes north or south of the Sun’s disc at inferior conjunction, transitioning from the evening to morning sky. On March 25, the planet passes well north of the Sun and early risers may like the challenge of trying to spot it in the morning sky before sunrise.

Another transition occurs during March when Earth reaches the first of the year’s equinoxes. At 10:29 GMT on March 20 the centre of the Sun’s disc crosses the Celestial Equator. At this time the Sun’s apparent position is moving north at its greatest rate.

Consequently the period of daylight is also increasing at its fastest rate. It’s often stated that the length of day and night are equal across the world at an equinox. In reality, factors such as atmospheric refraction complicate this. The actual date of equal day and night varies with location and is called an equilux. For the UK, the March equilux typically occurs several days before the equinox.

Despite the shortening nights, there is still plenty to see after sunset. One highlight will be comet C/2015 V2 Johnson. This should be visible in binoculars from now through to the middle of 2017 and has been showing a noticeable tail over previous weeks.
It’s particularly well placed this month in the northern part of Hercules, an area of sky that never sets from the UK. A good time to start looking for this area is in the period around midnight when it’ll appear above the east-northeast horizon approximately half way up the sky. The comet was discovered in November 2015 by Jess Johnson of the Catalina Sky Survey, using a 68cm diameter telescope.

As far as the stars are concerned, centre-stage is occupied by mighty Leo the Lion. To his west is the faint inverted-‘Y’ of Cancer the Crab, the centre of which is marked by the beautiful Beehive cluster, Messier 44. Just visible to the naked eye on a clear night, this object looks amazing through binoculars.

Another cluster, Messier 67, is located just northwest of Cancer’s Alpha star, Acubens. This is much fainter than Messier 44 and best seen with a telescope.   Messier 67 is special because it is believed to have formed around the same time as our Sun. Its members also have similar compositions to the Sun and despite being 2,700 lightyears away, serve as useful solar analogues for detailed study. At one time it was thought that the Sun may even have originated within the cluster but subsequent detailed modelling would suggest this is probably not the case.
Virgo is the large sprawling constellation southeast of Leo and the current home of Jupiter which can be seen northwest of its brightest star, Spica. The constellation’s most prominent shape is a giant semi-circle known as the Bowl of Virgo. Several large galaxy clusters can be seen in this region giving rise to the name the Realm of Galaxies.
[ads-post][right-side]
A popular version of the mythology surrounding Virgo depicts her as Persephone, the daughter of Zeus and Demeter. Her stunning beauty engulfed Hades who abducted her to the Underworld. Angered at the loss of her daughter, Demeter ruined crops and rendered the Earth infertile.
Persephone fell in love with her captor and when Zeus stepped in to arbitrate, a deal had to be struck. Persephone agreed to spend six months of the year above ground with her mother and six months with Hades. To mark her daughter’s return to the Underworld in the autumn, Demeter puts life on hold. In spring, when Persephone re-emerges, life is allowed to resume once more. This legend is rather biased towards the Northern Hemisphere! 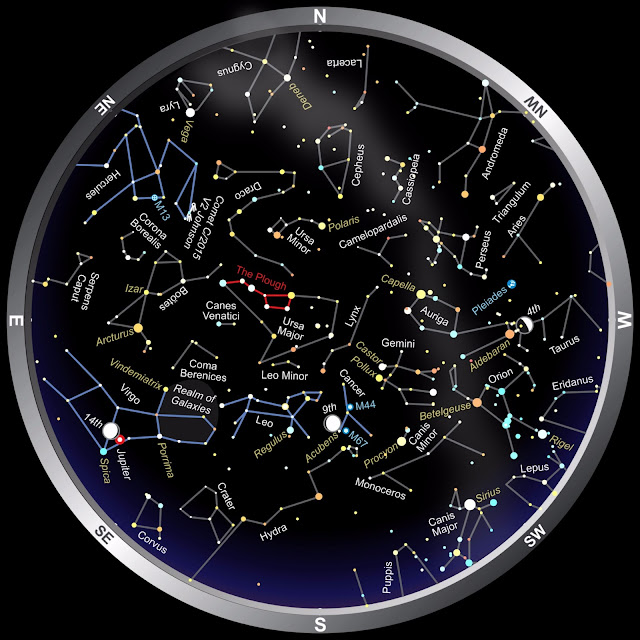 This chart shows how the sky appears at 11pm GMT on March 1, 10pm GMT on March 15 and 10pm BST on March 31. The clocks go forward by one hour at 1am on 26 March. The planets are shown along with the location and phase of the Moon at five-day intervals. The Moon is full on March 12. The stars are shown as circles; the larger the circle the brighter the star. The hazy area represents the Milky Way. Orientate the chart by holding it in front of you rotated so the compass bearing at the bottom matches the direction you’re facing. The bottom of the chart then reflects your horizon with the middle of the chart representing the view directly above your head. The chart is designed to be viewed using a red torch outside. Red light allows you to see the chart detail without ruining your night vision.
Credit: The Telegraph (UK)
astronomical calendar
136
Share FacebookTwitterWhatsApp

NASA is Going to Create Universe’s Coldest Spot in ISS

Enjoy the most beautiful sky in 2017

How to detect ovarian cancer earlier