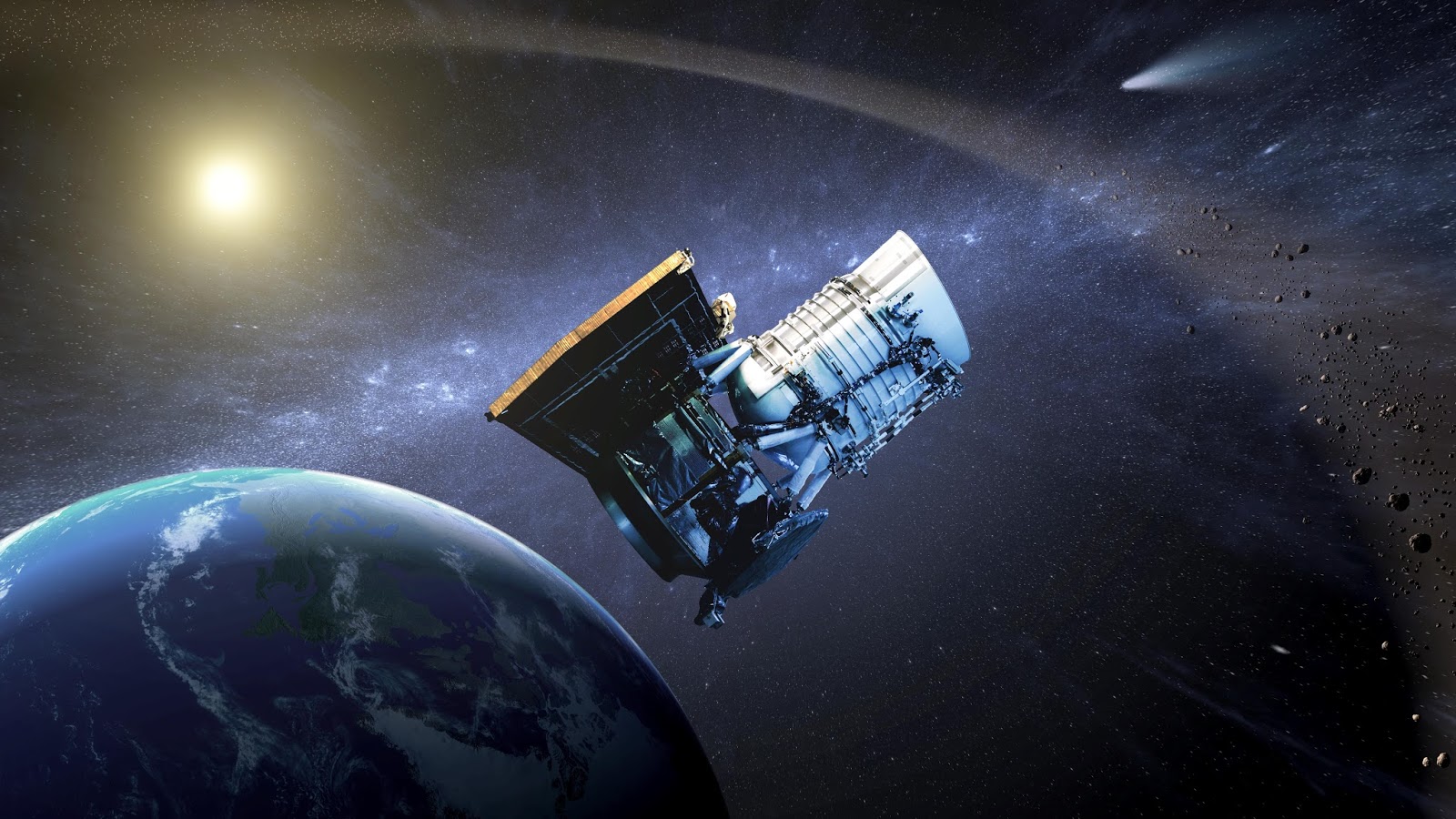 NASA’s NEOWISE mission has recently discovered some celestial objects traveling through our neighborhood, including one on the blurry line between asteroid and comet. Another—definitely a comet—might be seen with binoculars through next week.
An object called 2016 WF9 was detected by the NEOWISE project on Nov. 27, 2016. It’s in an orbit that takes it on a scenic tour of our solar system. At its farthest distance from the sun, it approaches Jupiter’s orbit. Over the course of 4.9 Earth-years, it travels inward, passing under the main asteroid belt and the orbit of Mars until it swings just inside Earth’s own orbit. After that, it heads back toward the outer solar system. Objects in these types of orbits have multiple possible origins; it might once have been a comet, or it could have strayed from a population of dark objects in the main asteroid belt. 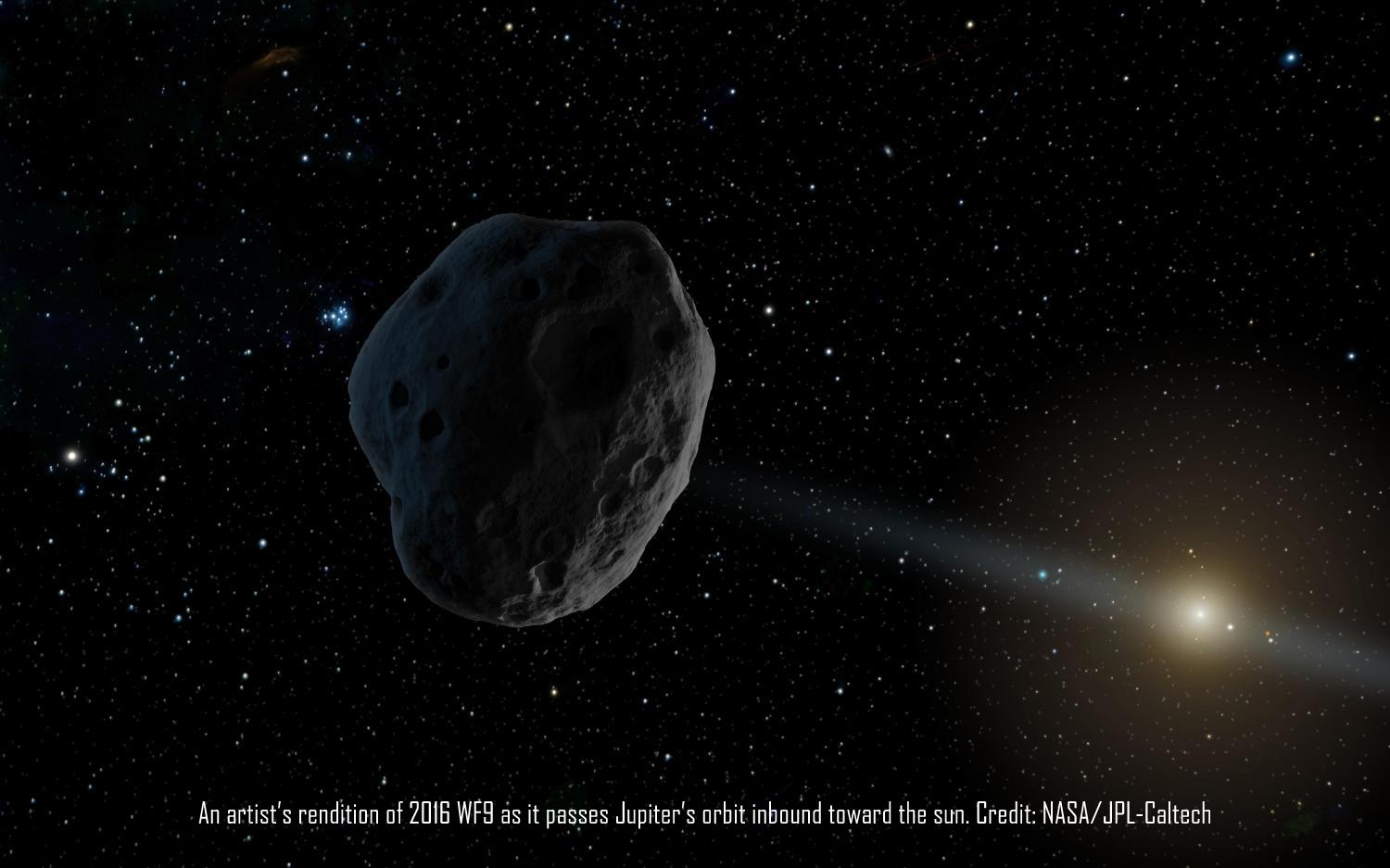 2016 WF9 will approach Earth’s orbit on Feb. 25, 2017. At a distance of nearly 32 million miles (51 million kilometers) from Earth, this pass will not bring it particularly close. The trajectory of 2016 WF9 is well understood, and the object is not a threat to Earth for the foreseeable future.
[ads-post][right-side]
A different object, discovered by NEOWISE a month earlier, is more clearly a comet, releasing dust as it nears the sun. This comet, C/2016 U1 NEOWISE, “has a good chance of becoming visible through a good pair of binoculars, although we can’t be sure because a comet’s brightness is notoriously unpredictable,” said Paul Chodas, manager of NASA’s Center for Near-Earth Object (NEO) Studies at the Jet Propulsion Laboratory in Pasadena, California.
As seen from the northern hemisphere during the first week of 2017, comet C/2016 U1 NEOWISE will be in the southeastern sky shortly before dawn. It is moving farther south each day and it will reach its closest point to the sun, inside the orbit of Mercury, on Jan. 14, before heading back out to the outer reaches of the solar system for an orbit lasting thousands of years. While it will be visible to skywatchers at Earth, it is not considered a threat to our planet either.
NEOWISE is the asteroid-and-comet-hunting portion of the Wide-Field Infrared Survey Explorer (WISE) mission. After discovering more than 34,000 asteroids during its original mission, NEOWISE was brought out of hibernation in December of 2013 to find and learn more about asteroids and comets that could pose an impact hazard to Earth. If 2016 WF9 turns out to be a comet, it would be the 10th discovered since reactivation. If it turns out to be an asteroid, it would be the 100th discovered since reactivation.
What NEOWISE scientists do know is that 2016 WF9 is relatively large: roughly 0.3 to 0.6 mile (0.5 to 1 kilometer) across.
It is also rather dark, reflecting only a few percent of the light that falls on its surface. This body resembles a comet in its reflectivity and orbit, but appears to lack the characteristic dust and gas cloud that defines a comet.

“This object illustrates that the boundary between asteroids and comets is a blurry one; perhaps over time this object has lost the majority of the volatiles that linger on or just under its surface.”

Near-Earth objects (NEOs) absorb most of the light that falls on them and re-emit that energy at infrared wavelengths. This enables NEOWISE’s infrared detectors to study both dark and light-colored NEOs with nearly equal clarity and sensitivity.

“These are quite dark objects,” said NEOWISE team member Joseph Masiero, “Think of new asphalt on streets; these objects would look like charcoal, or in some cases are even darker than that.”

NEOWISE data have been used to measure the size of each near-Earth object it observes. Thirty-one asteroids that NEOWISE has discovered pass within about 20 lunar distances from Earth’s orbit, and 19 are more than 460 feet (140 meters) in size but reflect less than 10 percent of the sunlight that falls on them.
The Wide-field Infrared Survey Explorer (WISE) has completed its seventh year in space after being launched on Dec. 14, 2009.
Data from the NEOWISE mission are available on a website for the public and scientific community to use. A guide to the NEOWISE data release, data access instructions and supporting documentation are available here.
Access to the NEOWISE data products is available via the on-line and API services of the NASA/IPAC Infrared Science Archive.
Via: Phys.org by NASA
cometneowise
125
Share FacebookTwitterWhatsApp

Hubble is Chasing After a Cosmic ‘Megamaser’

NASA Hints at Possible Change in Water ‘Fingerprint’ of Comet

Why does Blue light cause harm on Human eye?