By: Editorial Staff on Feb 18, 2017
133
Share FacebookTwitterWhatsApp
The Universe as we know it is made up of a continuum of space and time – a space-time fabric that’s curved by massive objects such as stars and black holes, and which dictates the movement of matter.
According to Einstein’s gravitational waves disturbances can propagate through both space and time. But how that happens when properties of the fabric is continuously shifting.
Researchers have just come up with a new mathematical framework that could finally explain how disturbances move through a dynamic space-time fabric. A concept known as ‘field patterns‘.
[ads-post][right-side]

Field patterns, put very simply, break down space-time into a chessboard, like the one you can see below. The black squares represent one material, and the white squares represent another material with different properties.
The horizontal dimension of the chessboard represents space, and the vertical dimension represents time:
Now picture a disturbance, such as a pulse of laser light, moving forwards in time (starting at the bottom of the chessboard) and spreading out in space through the boundaries of each chessboard square, as in the animation above.
What field pattern theory aims to describe is the propagation of that pulse, and where it will end up. To do this, Milton and colleague Ornella Mattei use computer simulation to test and observe how a range of theoretical systems and patterns would behave.
You can see another example of those computer models in the illustration below – that pattern at the top is a field pattern: 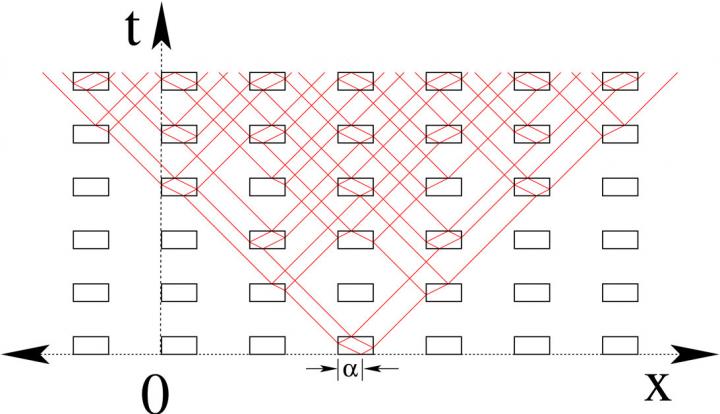 Field patterns exhibit characteristics of both propagating waves and localised particles, so this new mathematical framework could answer some of the biggest questions in quantum mechanics, where objects blur the fine line between particles and waves.

And, according to lead researcher Graeme Milton from the University of Utah, field patterns could even describe how some of the fundamental components of matter in the Universe come to exist.

When you open the doors to a new area, Milton explains, you don’t know where it will go.

Think of a branching tree :

let’s imagine the roots of the tree as the initial disturbance, and the ground as the initial time point. As time progresses (moving up the tree), the disturbance splits and branches as it encounters different boundaries. Once you get to the top of the tree, there’s a complex network of branches that can be described as the field pattern. If you look at one tree, the field pattern may appear chaotic, but look at enough trees over enough time, and you can see that the pattern repeats, like a chessboard.

The idea of a field pattern is a little like a wave in one tree but a separate wave in a different tree, Milton explains. You can imagine in one tree there’s a wind blowing from one direction that ripples the trees one way. But the other tree, with its own separate sets of leaves, as if the wind is coming from a different direction.

One of the lingering questions we have about quantum mechanics is exactly how objects behave as both particles and waves – in quantum mechanics, particles don’t have a specific location until they’re measured. Instead, their probable location is represented as clouds.

But as soon as an observer measures the position of an object, the wave-like behaviour collapses into a single point of location, like a particle.

This is known as wave-particle duality. And field patterns might bridge this duality, because the disturbances are represented as points and discrete lines, like a particle, but then they also diffuse like a wave.

In its current form, field pattern theory doesn’t allow for the pattern to collapse back into a single point, but the researchers think that it could be possible.

Even more than that, they believe the field patterns have a connection to the basic building blocks of matter. A growing idea in physics is that fluctuations in space and time at the smallest scales could give rise to field patterns that manifest themselves as electrons and protons.

What we see as electrons, protons or quantum mechanical waves are manifestations of the fundamental super microscopic scale of these field patterns, -said Milton.

This is still very early theoretical work, and the current field pattern models the researchers have developed have their limitations – for now, overlapping field patterns don’t interact with each other, and some field patterns unexpectedly seem to expand exponentially, seemingly out of control. But this paper is just a first pass at the idea.

Now that this research has been published, other mathematicians can begin to conduct their own investigations on field patterns, and only time will tell where the work ends up.

Something may pop up from this, said Milton. What’s really fundamental, though, is going in a completely new direction.

A Lander is Going to Europa to Find Sign of Life

We May Finally Get a Picture of Black Hole

Volcanoes on Mars, Earth’s Dinosaurs Went Wiped Out At…