New Type Of Quantum Critical Point Has Been Discovered 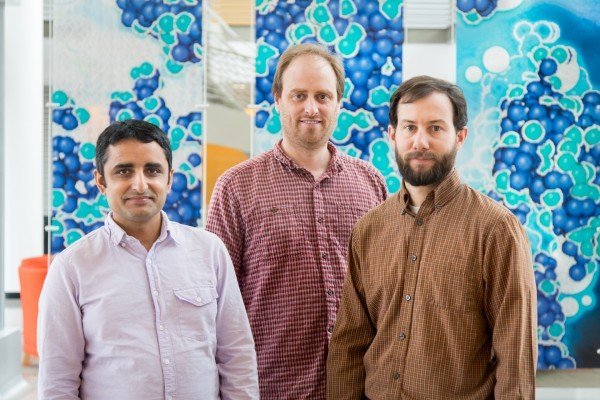 Featured here are researchers: (from left) Lekh Poudel, Andrew Christianson and Andrew May.
Credit: Genevieve Martin, Oak Ridge National Laboratory, U.S. Dept. of Energy.
These ORNL researchers have discovered a new type of quantum critical point, a new way in which materials change from one state of matter to another. When matter changes from solids to liquids to vapors, the changes are called phase transitions. Among the most interesting types are more exotic changes — quantum phase transitions — where the strange properties of quantum mechanics can bring about extraordinary changes in curious ways.
Neutrons and a ‘bit of gold’ uncover new type of quantum phase transition.
In a paper published in Physical Review Letters, a team of researchers led by the Department of Energy’s Oak Ridge National Laboratory reports the discovery of a new type of quantum phase transition. This unique transition happens at an elastic quantum critical point, or QCP, where the phase transition isn’t driven by thermal energy but instead by the quantum fluctuations of the atoms themselves.
The researchers used a combination of neutron and X-ray diffraction techniques, along with heat capacity measurements, to reveal how an elastic QCP can be found in a lanthanum-copper material by simply adding a little bit of gold.
Phase transitions associated with QCPs happen at near absolute zero temperature (about minus 460 degrees Fahrenheit), and are typically driven at that temperature via factors such as pressure, magnetic fields, or by substituting additional chemicals or elements in the material.

“We study QCPs because materials exhibit many strange and exciting behaviors near the zero temperature phase transition that can’t be explained by classical physics,” said lead author Lekh Poudel, a University of Tennessee graduate student working in ORNL’s Quantum Condensed Matter Division. “Our goal was to explore the possibility of a new type of QCP where the quantum motion alters the arrangement of atoms.

“Its existence had been theoretically predicted, but there hadn’t been any experimental proof until now,” he said. “We’re the first to establish that the elastic QCP does exist.”

“Neutrons allowed us to look deep into the material at extremely low temperatures to see where the atoms were and how they were behaving,” Poudel said.

“Because gold atoms have a significantly larger atomic radius than copper atoms, when we add gold to the material, the mismatch of atoms inside the crystal structure suppresses the phase transition to a lower temperature by manipulating the structure’s internal strain. At near zero temperature, where thermal energy no longer plays a role in the phase transition, we can see the effects of quantum fluctuations in the motion of the atoms,” Poudel said.

The researchers also performed heat capacity measurements, which showed how much heat was needed to change the temperature of the material a few degrees and provided information about the fluctuations in the material.

“Importantly, the combined results show that this is the first example of a potential elastic QCP, where the electronic energy scales don’t bear any relevance to the quantum fluctuations,” said Andrew May, a researcher in ORNL’s Materials Science and Technology Division.

“This elastic QCP in LaCu6-xAux is a perfect example of where the fundamental behavior of a QCP can be studied without the complication of the charge of the electrons, which would probably not be possible in other examples of QCPs,” said Poudel. “Now that we’ve found them, we can more closely study the microscopic fluctuations driving this quantum phase transition and apply other techniques that will give us a greater depth of knowledge about these extraordinary behaviors.”

Of the research, University of Tennessee and ORNL joint faculty member David Mandrus said, “This work is a great example of how the University of Tennessee and ORNL can team up to produce first-rate science and deliver an unequaled educational opportunity for a highly motivated Ph.D. student. Success stories such as this will help to attract more young talent to Tennessee, which will benefit both UTK and ORNL.”
Materials provided by Oak Ridge National Laboratory.
neutronquantum
110
Share FacebookTwitterWhatsApp

Most Massive Brown Dwarf Has Been Detected