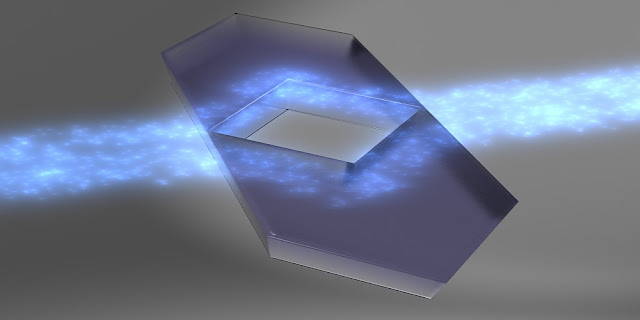 Recreation of the operation of the layer of invisibility devised by the researchers.
Credit: Elhuyar Fundazioa
Researchers at the Public University of Navarre (NUP/UPNA) and the Universitat Politècnica de València (UPV) have come up with a new invisibility cloak capable of concealing objects in diffusive atmospheres, not just in direct light.
As Carlos García-Meca of the UPV’s Centre for Nanophotonic Technology explained, diffusive environments are those in which the light is not propagated in a straight line, but bounces around.

“To provide some cases closer to us, a diffusive environment would be what we find on a foggy day, in cloudy water or in a place with smoke, but also in our organic tissue. Our proposal establishes the basis to make a plane in the fog or a submarine in the sea undetectable,” said García-Meca.

The NUP-UPNA and UPV researchers have conducted a simulation of this new invisibility cloak and will soon be working to build it in the lab.

“It would be fairly straightforward, because all we would need is two different materials with a specific diffusivity; by playing around with them, we would be capable of producing the cloak that would cause the light to circulate around the object in such a way that the object would be hidden. We could achieve perfect invisibility; but only for diffusive atmospheres, of course,” said lead researcher Bakhtiyar Orazbayev, who is conducting his work at the Public University of Navarre.

The idea of making an object invisible by surrounding it in a special material capable of bending the light around it was proposed about a decade ago. Since then, scientists have discovered that producing a device of this type is fraught with difficulties from a fundamental as well a technological point of view.

“It has recently been shown that this difficulty disappears if the object one wants to conceal is in a diffusive environment. In this case, and unlike in non-diffusive atmospheres, it is possible to build, in a fairly straightforward way, invisibility cloaks of a macroscopic size that work for any light direction and on a high bandwidth. However, the cloaks proposed so far do not work properly when the object is illuminated by short light pulses, essential in a large number of applications,” pointed out Alejandro Martínez-Abiétar, researcher at the Centre for Nanophotonic Technology.

The proposal devised by the UPV and NUP-UPNA researchers solves this problem by taking a different approach based on a technique known as transformation optics, which determines which material is best suited to creating the cloak and concealing the object.
The devices have several applications that cannot be tackled by means of any previous design.

“Apart from the ones already mentioned, they would render invisible objects susceptible to causing interference in communication systems and in image tomography systems in which work is often done with diffusive mediums such as organic tissue,” concluded Miguel Beruete, a researcher at the Public University of Navarre.